skip to main | skip to sidebar

BUGGED AND TAILED IN EDEN 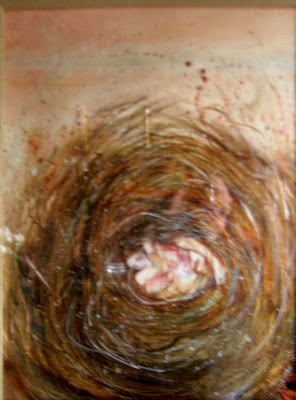 *** BUGGED AND TAILED IN EDEN

At this exact second something fitsie flits aggressively about Ever’s halo head. It makes a swift three point landing on her shapely bare left shoulder. Without hands, she can only bat her flashing lashes (lashes?) and twitch her snub nose. (Ever has incredibly long sweeping lashes of infinitely fine copper wire that are often sparked with a quivering energy so bright she can use them like flashlights.)

“Scat! Scat!” Ever’s voice has a frantic edge to it as she spits out air through puckered lips toward the bug.

“Wouldn’t you know it, my first moment in Eden and I’m assaulted by a thirsty beastie bug!” snorts Ever.

“Beg pardon…Quito at your service. I’m a master mosquito,” buzzes Mr. Quito. “And, if you will permit me, I might mention that you are a bit on the puny side.” He makes a snitty production of spitting out a thin stream of something that looks like weak pink lemonade.

“I suggest some apple juice.” He cocks his triangular head at her and remains, his long curled tongue at the ready, on her moist shoulder.

Ever is scandalized at such an assumptive pronouncement and looks around in the moonless air for a mirror to affirm that she still possesses her usual inescapable allure, but there are only murky puddles splattered randomly here and there about the dense verdant scenery. The waning light beckons, but the moon beyond the clouds has a cold, cold heart and it casts too dim a glow to reflect on. Even so, she kneels at one of these puddles and it vaguely mirrors the mess of what might once have been hair. The time tunnel is evidently torture on tresses.

“Woohoo. I need a hat!” She bumps against a sapling and a loosely woven bird’s nest tumbles upside down onto her head and comes to rest at a rather rakish angle.

“TA DA!” Ever takes a shaky bow and rises in a slightly gawky twist. Balance is skill that begs practice. Her left copper eyebrow lifts in a quirk. She wonders if she has a tail. It is her first preponderosity in Eden.

Have you ever had a dream where you actually had a tail you could wag? It really is the most astounding experience. It is almost as delicious as a dream where you can easily levitate and fly without equipment.

But, excuse me, I dither.

A tail can be quite expressive, not to mention that it is a fabulous fashion accoutrement. Just the perfect thing to twitch into a decorative curl or drag behind you like an afterthought that says you have it all. They can be sleek, spiky or frizzy, striped, solid, spotted or tipped, and can appear in an infinite range of colors from subtle to outlandish.

There is ripe evidence that you can accomplish streamlined tree travel and even suspended animation with one. You can weave it around anything you wish to enthrall and you can surround yourself with it when you need a little hideaway. A tail is a must have marvel and a vital appendage in a savage world. You can slyly reveal so much about your mercurial mood with one.

Or, you can even give a tail a brief snap to show disgust. Cats do this splendidly. A slow swishing is also one of their supreme specialties. They can inflict a rather vicious swipe with a tail that sends snaky shivers down the spines of all observers. In fact, cats were possibly the first fashion mavens in the mammal realm. They started all this trash with trends and fads and preening and runway stalking. It surely wasn’t an orangutan. I’m holding cats ultimately responsible for bell bottoms, moo moos, minis and those irritatingly itchy thongs.

Dogs, of course, are more clunky thumpers and wild sweepers. Their abundant emotions and rabid enthusiasms are explicit in their irrepressible tails. Tucking a tail underneath says defeat like no other motion save bearing the throat to an alpha wolf. A tail would be a true and valuable wonderment to a human. How has our human vanity ever survived with out them?

Have you missed moi? Perhaps I will be found in 2012. I have lots to share if I can just unravel my navel.

For those of you who have trustingly entered Eden's tangles and expected to follow the titillating travails of EverEven, well, whoops! Due to somewhat unexpected complications a certain swift halt was encountered when Ever smacked into a knotty branch on the Tree of Life and became sorely senseless. You may be shocked to know that the tree has been growing for simply gadzooks of eons and has developed quite a few stumps, twists and trunks. But, hold tight, there is surely more to come. Sooner rather than later the whirl will raise the wind.
Posted by ever even at 7:15 PM No comments: 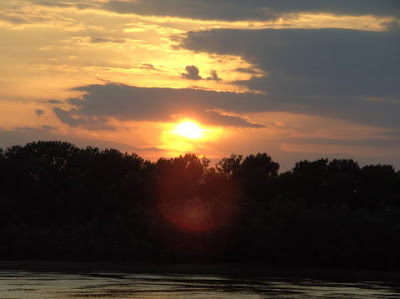 Ever Even’s
enlightening escapades
in the great green garden.
“O” note:
Let us just gently say that Ever’s nimble and bouncy brain is a bit dimly lit, though her heavy heart is as bright as deep-night star shine. Her hasty and imprudent assumptions brazenly defy reality, but eventually she bumbles into the hard truth. Slide, glide. Up, down, right, left, right, wrong, turn around. Slide, glide. Side to side. As with every tiny dancer, perfect balance is her aim.
Will she ever get even?
***
At the moment…
Twilight seeps into profound purple as our befuddled heroine, Ever Even, is whisked back into ’s muted origins.
***
Here in the cool darkness, drifting upside down and backwards, I briefly consider my particular perplexities. What! What? Where? How? Why Now? Why me? These little naggers are odiously preponderant and would overwhelm me if I paid them the least heed.
TA TA.

Who says you can't go backwards and inverted? Who, indeed? Am I not easing into the entwined vaults of just so? I do sense I am sailing solo in the verdant vapor. But, no worry. Who needs a partner? Don't they always push forward? After all, am I not the original brain dancer? I am so adept at dancing with myself I hardly notice the vacuum. Reverse is my natural mode and moon phase is my time zone.

Speaking of two steps, I am beginning to make out my feet through the misty swirl. Here in they are tiny split hooves...sort of up-turned on the tip, like what you'd find on an elegant gazelle, or maybe a piglet. Definitely not a fox. I might have to consider some polish. Something subtle, like pale puce. Don't want to foot-fright the fauna first off. The flora can take care of itself (itselves?). TA TA.
Nonetheless, my little prissers definitely need some spit and shine.

My hands seem to be missing. Oh well, TA TA. Where have those prissy, pointy pinchers, gotten to? I am more than fond of my fingers and things might be troublesome without their perky presence.
One thing I can see is the foliage and it is lush and chaotic. A bit gaudy, but strangely enticing in a primal sort of way. What ever could be lurking in those bushes? I think I am going to be right at home here. Even though I have an impressively deep reservoir of Irish gloom to tide me over the random joys and exultations of an ordinary life, I am prepared to await with abiding anticipation and open optimism whatever befalls me in this gargantuan green garden.
“O” note:
Ever is over fond of alliteration…it’s the pesky poet in her.

OMG - She alliterates all over Eden.
Posted by ever even at 8:39 PM No comments: 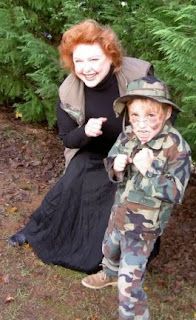 Eve Oldham is broadly known for her interpretive fresco portraits of distinctive women. Her commissioned work has been widely exhibited in the South and can be seen at www.eveoldham.com. along with a more complete and less biased bio. These hundred paintings are copyrighted and registered in the US Library of Congress. TA TA!

She has written and published “The Essential Apprenticeship for the Primary Artist,” a serious guide to defining one’s inner purpose. She gives seminars and lectures to fervent souls eager to pursue their best selves. She has recorded an accompanying CD for this in a fluty voice that would charm a cobra. In an impertinent vein as Ever Even she writes “The Rules” books, little gift booklets on a mad mixture of subjects that bluntly explain how things are, like it or not.

If you suspect that I did this biased bio dirty deed for her, you are right. I chose the twenty year old photos, too. She primly insisted I include the one with her and a Halloween Frankster. Sometimes Eve’s three faces get a bit blurry and foully focused and I am forced to stage an intervention into stark reality. But let me assure you, you will want to meet this bouncy bundle of talents, if not face to face(s) then certainly through her nimble work.

Personal perspectives from Ever Even.
Dawn is seeping through my first blogging experience.
As the light expands I await discoveries unimagined. 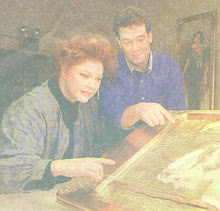 at work with Alan Shuptrine

ever even
LOOKOUT MOUNTAIN, TN, United States
A BRIEF BUT BIASED BIO OF EVER EVEN by a committed fan. Ever Even, also known as Eve Oldham and Mz. Eve, is a mighty unknown force in creative circles. Dancing among her devilishly split personalities and impish aliases are a passionate portrait painter, a titillating teacher and an accomplished, if somewhat conflicted, author. A former advertising illustrator, copywriter and marketing executive, she stuffed so many awards in her trophy case it burst from bulimia. Among her dazzling prizes are the coveted National “Addy” and the AAF Silver Medal for Lifetime Achievement. Broadly known for interpretive fresco portraits of distinctive women, these commissioned works can be seen at www.eveoldham.com. As can excerpts from The Essential Apprenticeship, her guide to the inner Primary Artist. As Mz. Eve she abides in the contented chaos of Notchwood, her haunted studio home, on the gentle slope of Lookout Mountain, with her dauntless Wonderpup Sadie Mae, and her hunkish maverick mate, Big Daddy John. All her faces sport a shock of red hair and a grin that can light candles from fifty feet. She is adorably shy and cuddly and way too embarrassed to write this sort of drivel.